Modern-Age Variations of Queen Victoria, Herend Porcelain’s most famous pattern that celebrates the Royal Wedding of Prince William and Catherine and the turquoise version was designer for Prince Harry and Meghan Markle.

On the eve of Prince William and Kate Middleton’s Royal wedding, Hungary formally presented Royal Garden dinnerware as the country’s official gift to the royal couple. Created by Herend specifically for William and Kate, the design is a modern interpretation of Herend’s classic Queen Victoria pattern, which celebrates its 160th anniversary in 2011.

Queen Victoria was first purchased in 1851 by its namesake upon her seeing it in London at the first World’s Fair. Ever since this iconic event, Herend became world-wide famous among kings, queens, and aristocratic families.

Familiar to many, the classic, eternal pattern is now presented in more contemporary setting with a focus on the peony, butterfly, and flower arrangement motifs, the play of colours enhancing their aesthetics. This decor is especially popular in tea sets. Did you know that Four Season Gresham Palace in Budapest serves Afternoon Tea in this set? 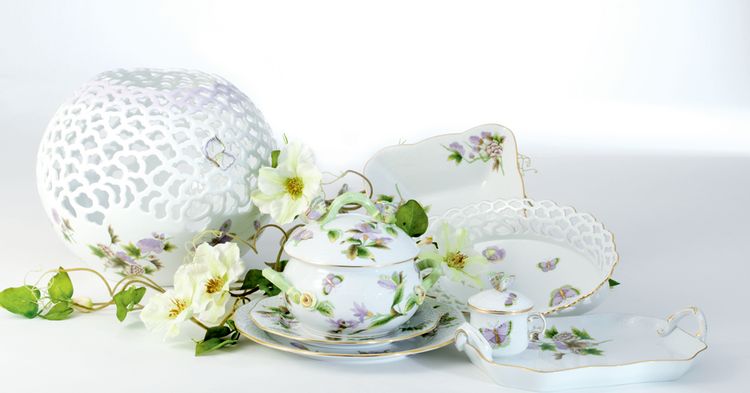 Colours of Royal Garden decor hold a symbolic meaning: Our relation to certain colours changes with our mood. Applied to create the two versions of the Royal Garden decoration, the unique pairing of cool and warm tones on bright white porcelain surface makes these pieces modern, thereby opening new dimensions for the eternal Herend Porcelain decor. The pairing of the two sets of tones is a rare and innovative touch, as cool and warm colours are complementary and their combined use creates a perfect harmony. 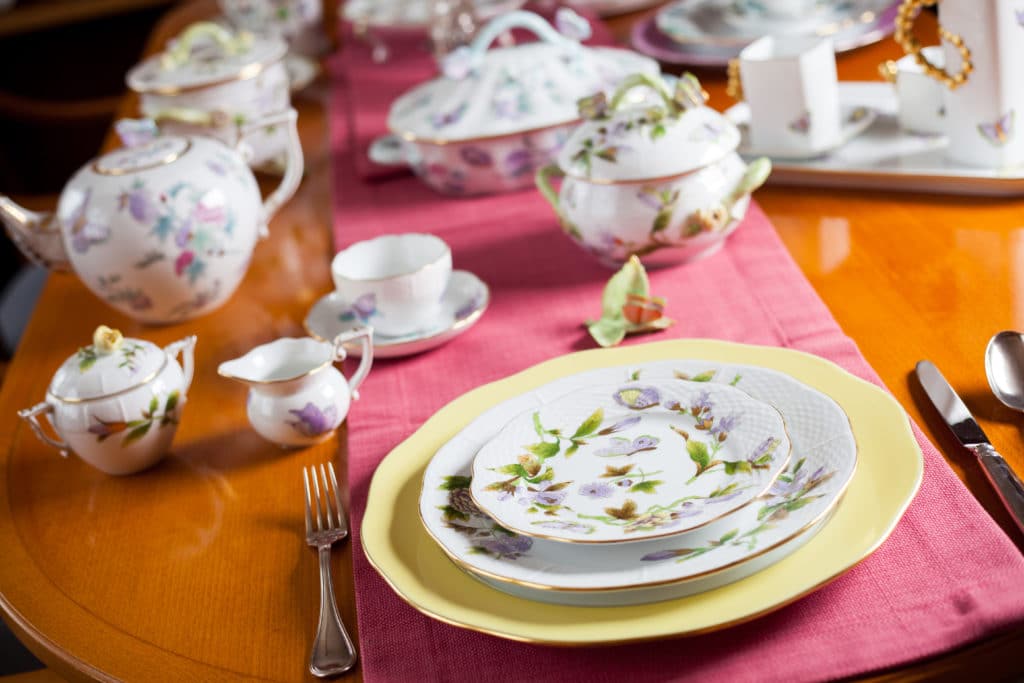 The colour purple used in both Prince Harry & Meghan Markle and Prince William and Kate Middleton versions is the colour of royalty and symbol of life. It is magical, mystical spiritual intuitive, sensitive, creative, artistic and esoteric.

On bright white canvas spiced with a unique play of colours, a classic is now reborn in the 21st century. Short after its introduction the new décor became popular among porcelain enthusiasts. The EVICT décor’s new name is Royal Garden. It is painted on pots and plates in different sizes, and available in tea, coffee and dinner sets.