Herend Porcelain Manufactory has just created a truly breathtaking masterpiece and YOU need to see it! Herend is an almost 200 years porcelain factory and their secret to survive all these decades is being proud to its traditions and continuously innovate and develop something new! Herend has always been at the forefront of porcelain making, searching for challenges, tempting the almost impossible, and stretching the limits of porcelain as a material to create special, unique works of art.

This year 3 master artists joined their forces and created the largest porcelain fountain ever. Sandor Vida designed this Monumental Fountain with Falcon Birds and it’s more than 170 cm high work of art, weighing more than 100 kg, can once again impress fans of exceptional masterpieces. It is safe to say that no one but the world’s largest porcelain manufactory is able to produce such a beautiful handmade porcelain piece.

Sandor Vida has emphasized with the background colour of the vase green of nature and with gold motifs the life-living power if sunlight. The connection of motifs with dynamic lines symbolizes the energetic dynamism of the flight of the falcons. The master painter depicted the lords of the air in amazing anatomical detail. The painting of the amazing porcelain magic took nearly a thousand hours.

The ornamental fountain has been constructed of 28 porcelain units, and the masters needed more than 1 year to make the white porcelain. The porcelain work of art consists of three main parts: the openwork double-walled pedestal, the openwork middle part, and the lid with Fo dog knob. The number of pierced holes is 3000. The falcons were painted by senior and junior master painters, including Anita Palkovics who has been visited Canada many times with her amazing master painting demonstration and class. 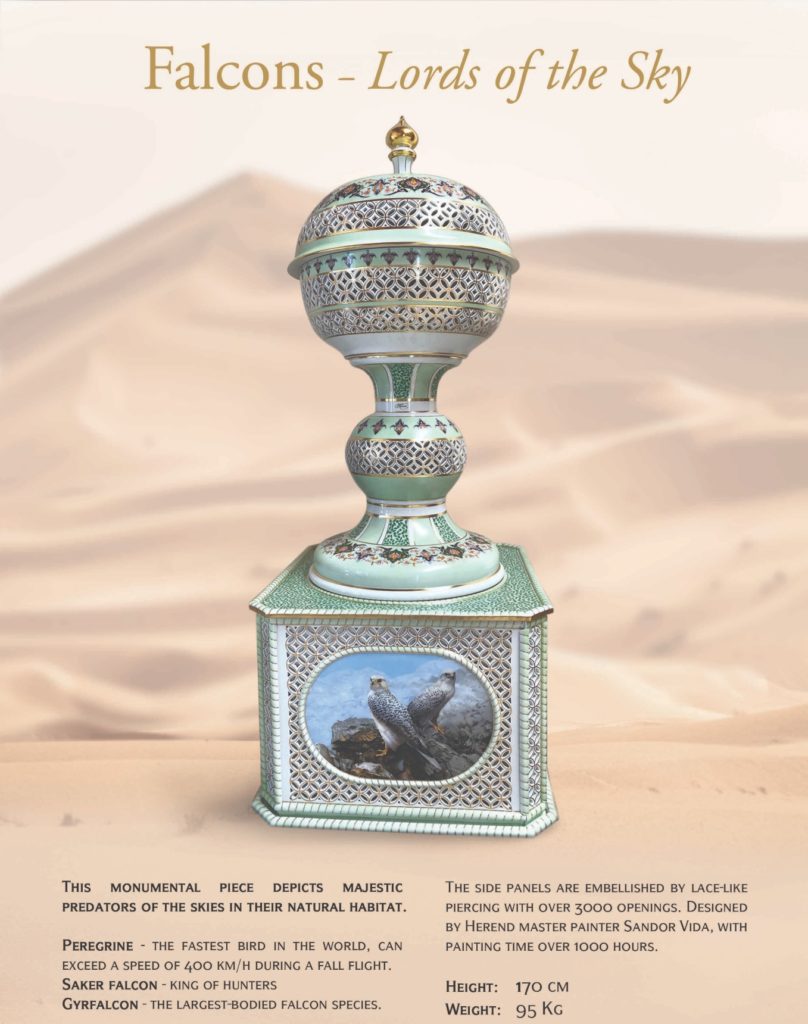 The main theme of the decoration this time is sky predators, graceful falcons. Four pairs of falcons were designed and painted on the ornamental fountain: peregrine falcons, gyrfalcons and two pairs of saker falcons. All falcon species are protected and considered as noble, royal hunters in all hunting cultures of the world without exception.

On one side is the peregrine falcon, the king of falcons, the noblest hunter. Every falconer’s dream, the fastest bird in the world can exceed a speed of 400 km/h during a fall flight. It can be found almost all over the Earth.

On two sides can be seen the saker falcon, the Turul. It is a very popular falcon species and one of the species most commonly used for falconry. It can be found in almost every part of the world. Its living spaces are in gently sloping and flat areas. It is extremely intelligent and can be used for hunting very effectively in mountains, on plains and even in desert conditions! It is a real all-rounder.

On the fourth side, the gyrfalcon is depicted. The gyrfalcon is the largest-bodied falcon species. The strictly protected bird is rarely used in hunting today, however, it can still be found among actively hunting falcons.